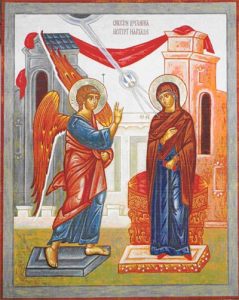 The Greek and Slavonic names for the Feast may be translated as “good tidings.” This, of course, refers to the Incarnation of the Son of God and the salvation He brings. The background of the Annunciation is found in the Gospel of Saint Luke (1:26-38). The troparion describes this as the “beginning of our salvation, and the revelation of the eternal mystery,” for on this day the Son of God became the Son of Man.

There are two main components to the Annunciation: the message itself, and the response of the Virgin. The message fulfills God’s promise to send a Redeemer (Genesis 3:15): “I will put enmity between you and the woman, between your seed and her seed; he shall crush your head, and you shall lie in wait for his heel.” The Fathers of the Church understand “her seed” to refer to Christ. The prophets hinted at His coming, which they saw dimly, but the Archangel Gabriel now proclaims that the promise is about to be fulfilled.

But our salvation was not imposed upon us by a demanding God.  Rather, His economy toward us required the assent of the Virgin Mary, who, in humble obedience accepts the news from the Angel proclaiming, “Behold, the handmaid of the Lord! Let it be unto my according to thy word!”  By her obedience, the most Holy Theotokos sets aside the disobedience of our first mother, Eve!  In this, the Virgin exemplifies the synergia demanded of the faithful Christian working out his salvation with fear and trembling.

The Incarnation of the Word was not only the work of the Father, of his Power [the Son], and of his Spirit – the first consenting, the second descending, the third overshadowing – but it was also the work of the will and the faith of the Virgin. Without the three divine persons this design could not have been set in motion; but likewise the plan could not have been carried into effect without the consent and faith of the all-pure Virgin. Only after teaching and persuading her does God make her his Mother and receive from her the flesh that she consciously wills to offer him. Just as he was conceived by his own free choice, so in the same way she became his Mother voluntarily and with her free consent.

On this day we honor the Blessed Virgin for her obedience and acceptance of her role in God’s plan for our salvation, and we strive to emulate her humble submission to the will of our Creator.